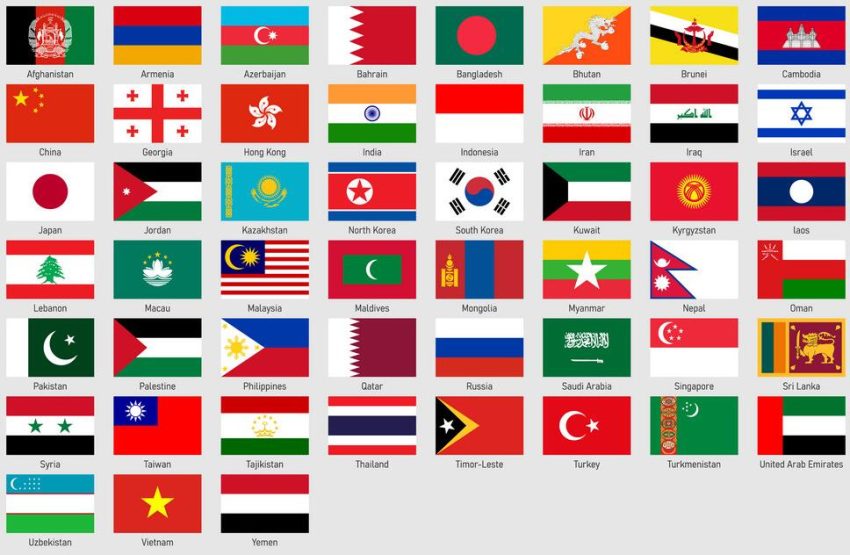 The Great Wall of China winds its way through the landscape like a sun-warmed dragon.

In Bali, bathers enjoy life on the snow-white sandy beaches. In the Siberian forests, bears roam among the twisted birches of the taiga. And in India, women in jewel-colored saris and stressed rickshaw drivers compete with sacred cows for the cramped space on the streets…

even though China is 5,200 km wide, does the country only have a time zone?

a third of the world’s population lives in two Asian countries – China and India?

How many countries are in Asia? The following table presesents all of the 50 countries in the continent of Asia. 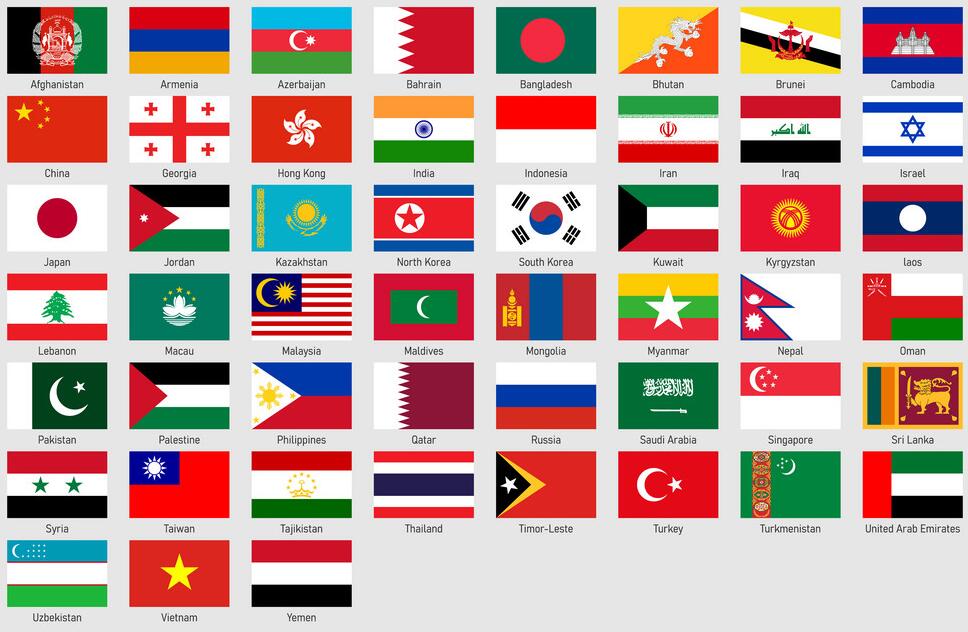 Source: Flags of Countries in Asia

Geography and wildlife in Asia

Asia alone, by virtue of its enormous size, is almost impossible to describe. The continent stretches from the Arctic Ocean in the north to the small Indonesian tropical islands in the south, and from the Muslim Middle East to the countries in the far east, whose population professes Hinduism or Buddhism. Asia has the world’s highest mountain range, the Himalayas, the world’s most rain-poor areas in the vast deserts of Mongolia and Siberia, as well as dense tropical rainforests in Indonesia and Malaysia . Wildlife follows the varied landscapes and can display everything from reindeer, wolves and wild horses in the polar regions to tigers, elephants and peacocks in the tropical belt.

The population of Asia

Large areas of Asia, such as the Saudi desert and the Russian tundra, are almost completely uninhabited, while other Asian areas are among the most densely populated in the world. This is especially true where monsoon rains and large rivers such as the Yangtze River, the Mekong River and the Yellow River (Huanghe) provide fertile land. Otherwise, it is the cities that are most successful in attracting the Asian population. Especially in cities like Chinese Chongqing and Karachi in Pakistan, the population has increased avalanche in recent years. Asia’s total population has long since exceeded four billion.

It is no longer opium and spices that attract, but Asia is still a popular destination among travel-hungry travelers. The possibilities for a fantastic holiday are almost inexhaustible on the huge continent. Cultural gems such as the Forbidden City in the heart of Beijing, the Angkor Wat Temple in the Cambodian jungle or the Indian Taj Mahal in shiny white marble are attractive sights. The desire for adventure can also be satisfied on Indonesian volcanoes, Tibetan hiking trails or in smoky surroundings from bonfires on the Ganges River in the Hindu holy city of Varanasi. The northern part of Asia can be experienced through a train window on the Trans-Siberian Railway, and the ingenuity of the Middle East to attract dollars and euros can be viewed in luxurious Dubai.