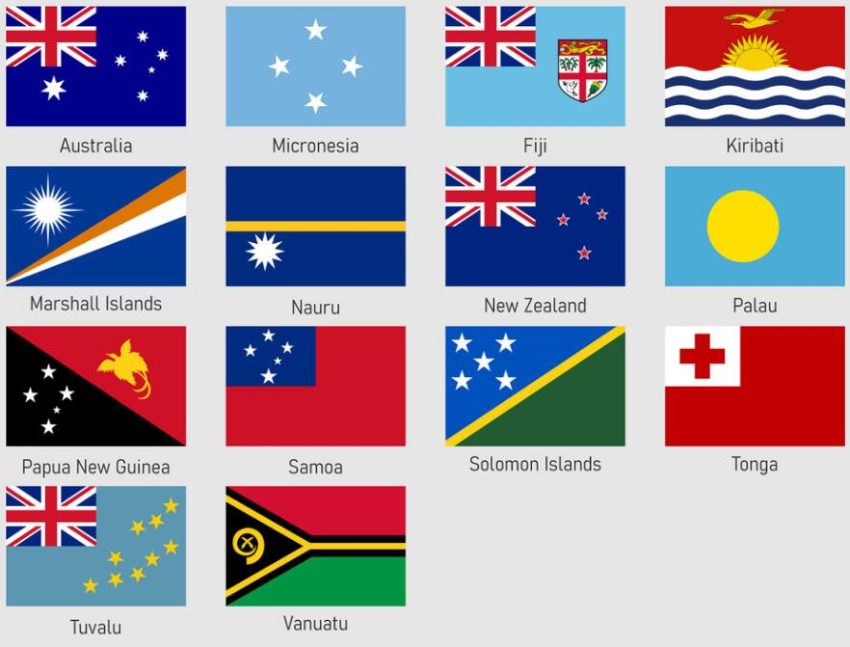 The surface of Australia consists of three basic orographic regions: the Great Western Australian Plateau occupying more than half of the country, the Central Australian Basin and the eastern escarpment of the Great Divide.

The Great Western Australian Plateau is fairly uniform, with more rugged areas being the Kimberley Highlands and Arnhem Land in the north and the MacDonnell and Musgrave Ranges in the middle of the continent. The plateau rises from the west coast and then dips slightly to the east into the “red center” of the continent, named for the distinctive red-brown color of the soil. Between the edge of the plateau and the Musgrave Ranges rises the largest monolith of rock in the world – Ayers Rock, also known by its original Aboriginal name of Uluru; it measures 10 km in circumference, is over 300 meters high and optically changes color in the sun.

The Central Australian Basin consists of three large artesian, often saline, basins separated from each other by low ridges; each of them is a rich reservoir of underground water. The largest is the Eyre basin draining into Lake Eyre at its southwestern tip. Two of Australia’s longest and most economically important rivers – the Murray and its Darling tributary – flow through the smallest Murray Basin.

East of the Central Australian Basin, the surface rises to the Great Divide and then falls somewhat more steeply to the coastal plains, which contain more than half of the country’s population. From northern Queensland to the southern coast of Victoria, mountain ranges run parallel to the coast before reappearing in Tasmania. In the highest part, the so-called Australian Alps, in the southeast, they exceed a height of 2000 meters. To the south west of Sydney rise the Blue Mountains. The middle part is low, the higher altitudes (over 1500 m) reach the mountains in the north near the city of Cairns. Parallel to the coast of Queensland stretches the largest coral formation in the world – the Great Barrier Reef, which stretches for about 2,300 km to New Guinea. The Australian mainland is geologically relatively stable, on the other hand, the oceanic territories are made up of numerous young islands of volcanic origin.

The climate varies with latitude from tropical to temperate. It is coldest in the mountains in the southeast and in Tasmania – these are the only places where it snows regularly. January and February are usually the warmest months; the summer season lengthens towards the north. The farthest north, closest to the equator, experiences high temperatures all year round. The arid and semi-arid regions of western and central Australia experience long periods of drought. The Lake Eyre basin often receives less than 150 mm of annual rainfall. In contrast, Arnhem Land on the north coast and northeastern Australia have a humid monsoon climate. The northwest and east coasts are plagued by occasional floods and typhoons. On the north and south-east coasts and in Tasmania, the annual average rainfall exceeds 2000 mm, in Queensland even 3000 mm.

Fed by heavy rainfall in the Great Divide, the Murray River and its tributaries provide water for most of the country’s irrigated land. The underground water of the artesian basins is a vital resource enabling the life of the inhabitants and the breeding of livestock, especially in the dry interior. Much of Australia is drainless.

Native forests and scrub are found mainly on the northern and eastern coasts and along inland waterways. The characteristic trees of Australia are Eucalyptus and Acacia. Towards the interior, with increasing aridity, the landscape turns into savannas (bush) and scrub, semi-desert and desert formations.

Vast areas of original vegetation were cleared for construction timber and arable land, and imported commercial species were often planted in their place. Native vegetation in some areas of the continent is disappearing due to millions of herds of grazing cattle and alien weeds introduced into the land with European cereals.

The animal is mostly endemic. Most native mammals are marsupials, including kangaroos, koala bears, wombats and opossums, whose young are born after a very short time and then grow up in their mother’s abdominal pouch. Even more unusual are the platypus mammals, represented by two species: platypuses and gerbils, which lay eggs and nurse their young. Most of Australia’s diverse birdlife consists of endemic species, such as the brown emu and the giant kingfisher. Beasts are completely absent.

These animal species, as well as the native flora, can hardly stand in competition with the animals and organisms brought here by the Europeans. The wild dingo is the only animal that came with the original inhabitants of the continent. Australia is also home to an unprecedented number of species of poisonous reptiles and spiders.

Countries in Australia and Oceania

How many countries are in Oceania? The following table presesents all of the 18 countries in the continent of Oceania. 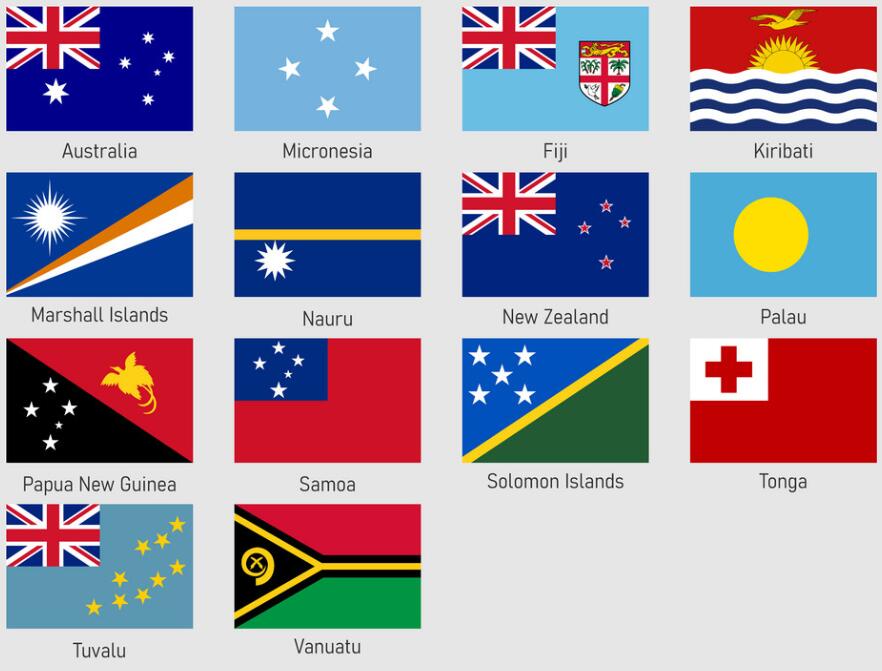 Source: Flags of Countries in Oceania

The first immigrants to Australia were apparently its current aborigines – Australian blacks who came here from Southeast Asia some 40,000 years ago. They subsisted by hunting and gathering and had little impact on the continent’s environment. Today, after two centuries of European colonization, Australia’s native environment has suffered irreparable damage.

The first European to provably sight the Australian mainland in March 1606 was the Dutch captain Willem Jansz. Although the Spaniard Luis Vaez de Torres sailed through the strait that bears his name a few weeks later, it is almost certain that he did not see Australia at all. Only a few later Dutch navigators mapped this area. Tasmania was originally called Van Diemen’s Land; it was named so by Abel Tasman (ca. 1603–59), who discovered it in 1642. It was renamed Tasmania only in 1855. Further research was carried out here by the British navigator James Cook (1728–79), who discovered and named it in 1770 Botany Bay in New South Wales.

British criminals sentenced to exile were transported to America during this period, but when the American Revolutionary War (1775–83) broke out, a new penal colony was needed. The British government first chose Botany Bay for it and later the more northerly Port Jackson, which later developed into Sydney. Tasmania, Queensland, Victoria and Western Australia were also originally penal colonies. Deportations of condemned prisoners did not end until 1868.

The rapid development of sheep farming in the 1830s pushed the original inhabitants out of their historical territories. The discovery of gold mines in New South Wales and Victoria in 1851 and 1852 prompted new waves of immigration. Demonstrations by miners against high royalties and for the granting of voting rights were suppressed by the army in 1854 near Ballarat, Victoria. In 1901, the six self-governing colonies founded the Federation of Australia with a parliament in Melbourne. In 1911, the territory of the Australian capital was separated from New South Wales, on which the new federal capital Canberra began to grow. Parliament first met there in 1927.

Australian troops fought alongside the British during World War I. Like Britain in the 1930s, Australia was badly affected by the global economic crisis, but after the outbreak of World War II, it again came to Britain’s aid. After the Japanese attack on the Hawaiian port of Pearl Harbor in 1941, a long and difficult struggle for control of the Pacific Ocean broke out, bringing Australia closer to the United States.

After the war, exports of agricultural products increased and many cities experienced a new period of prosperity. New waves of immigration from Europe weakened Australia’s ties to Britain. However, racial prejudice against Aboriginal Australians also persisted. The original inhabitants did not have civil rights until 1962 and were included in the population census for the first time only in 1971.

Most of the nearly 18 million Australians are of European, particularly British, descent. Indigenous Peoples – Australians make up just 1.5% of the total population, with a further 5.3% being either native Asians or citizens of Asian descent.

Efforts to increase the population led to the promotion of white immigration from mainland Europe after World War II. It was not until 1973 that the Australian government formally announced the end of the discriminatory “white Australia” immigration policy, which greatly influenced the nature of immigration in the following years.

Persistent poverty, poor health, and a lack of education reinforced the natives’ distrust of white-dominated society. It was not until 1976 that the federal government recognized Australians’ claims to their land and granted them the right to freehold land in parts of the Northern Territory. Some union states then followed her example. Almost all of the 260 original languages ​​have disappeared; very few have survived. English is spoken throughout Australia today. Almost half of the believers are Protestants, 1/4 Roman Catholics.

Most of the population lives in cities on the coast, the 6 largest agglomerations (Sydney, Melbourne, Brisbane, Adelaide, Perth and Canberra) concentrate almost 70% of the country’s population. The hinterland is sparsely populated (less than 1 inhabitant per km2).