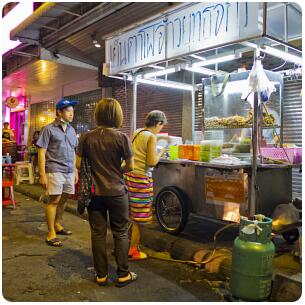 Khao San Road, Soi Rambuttr, Sukhumvit and the food courts of the malls have a lot of western restaurants. Of particular urgency are, of course, Italian dishes, of which pizzas are most coveted, burgers and steaks. Burgers and steaks are, of course, eaten with French fries, but other fries are also available. The quality of the food is high in some cases, and if the place is Italian-owned and the pizzas are made in a wood-fired oven, they are of an excellent standard. However, the downside of Western food is that it is completely overpriced, and a decent pizza can cost roughly the same as in Finland. If you want to eat pizza, you should prefer individual restaurants rather than chain restaurants like Domino’s, Pizza Company, or Pizza Hut.

For a long time, those in Thailand occasionally go to eat burgers and other Western dishes, but the most profitable thing in Bangkok is to focus on Thai and other Asian dishes.

There are many bars and restaurants with vegetarian dishes along Khao San Road and nearby streets, especially the adjacent Soi Rambuttr. They are often a little more expensive than food offered elsewhere and mediocre in some places, but the surroundings of Khao San Road are one of the best roads for vegetarians and vegans.

There are a lot of Indian restaurants in Phahurat, and there is a real concentration of them near the canal.

In Bangkok, food prices really fluctuate a lot, and there it is possible to eat in euros or put hundreds of euros in one meal. 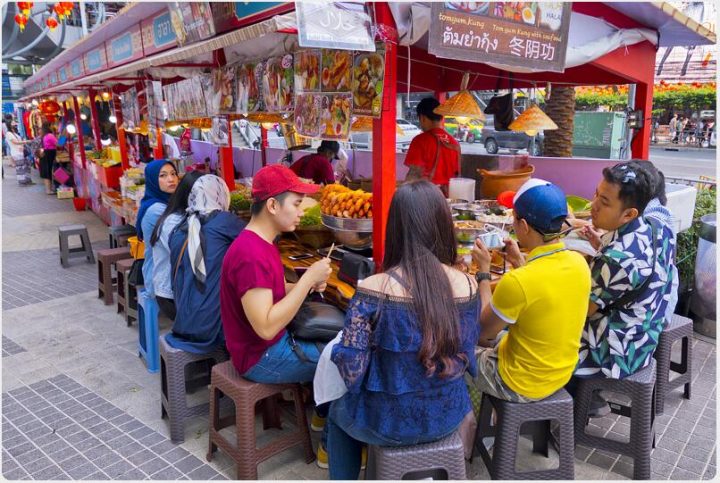 The most affordable places are the stalls, which are in many places. For example, Khao San Road and the adjacent Soi Rambuttri have stalls, but most are at the end of the streets. Many other places will also be greeted by stalls, such as in the Chinese district, Pratunam Market and the blocks behind Wat Arun, which are across the river. They open early, often as the sun rises, but some of them catch up as early as the afternoon.

The stalls around Khao San Road only open in the evenings and can be eaten from around 4pm, but the best stall food is served after dark. They serve a variety of dishes, the most common of which are soups, and some stalls offer only one or two servings. The stalls can be eaten from around 30 baht but also have dishes that cost 50-80 baht. Pad Thai in particular is inexpensive and is available in many places in different versions, including those suitable for vegetarians.

At food courts in shopping malls, the cheapest meals cost 50 to 80 baht, but they also have more expensive meals. Indian food can well cost 120-200 baht with rice, and Korean and Japanese food can also cost similar amounts. If you don’t want to waste your money on food, you can easily find excellent meals that cost 60 to 80 baht at food courts.

In the actual restaurants, prices start at 40 to 50 baht, and often the most affordable are local dishes such as soups and pad thai. In many restaurants, especially in tourist-favored areas such as Khao San Road and Sukhumvit, meals cost more than 100 baht, but there are many restaurants and stalls near Makkasan Station (BTS) where you can eat for 50-80 baht. The most expensive places to eat are Sukhumvit and Asok Montri Road, with the most non-Thai restaurants along the way.

Expensive are the special Seafood and other foods that require grilling and are rare. Grilled crabs and other seafood are available, but with side dishes they often cost between 200 and 500 baht.

Some of the most expensive dishes are Western dishes, and pizza made in a wood-fired oven along Khao San Road, for example, usually costs 200 to 300 baht. Burger meals are cheaper and can be obtained for 150-200 baht. Steak, especially if it is high quality, is pricey, and there are plenty of restaurants on Sukhumvit’s main streets, for example. The steak costs 250-500 baht, and if you want a decent steak, you might want to go to a Spanish or Argentinian restaurant. Australian steakhouses are also of high quality and are welcomed near Khao San Road, for example, where there are few Spanish and Argentinian restaurants common in Sukhumvit.

There is no custom of leaving a tip in Thailand, but people from English-speaking countries nonetheless give a tip, and so in some tourist-oriented places, a tip is expected and can even be actively sought. In Bangkok, however, as elsewhere in Thailand, there is a tendency not to leave a special gratuity, but it is customary to leave a few baht back in a restaurant. 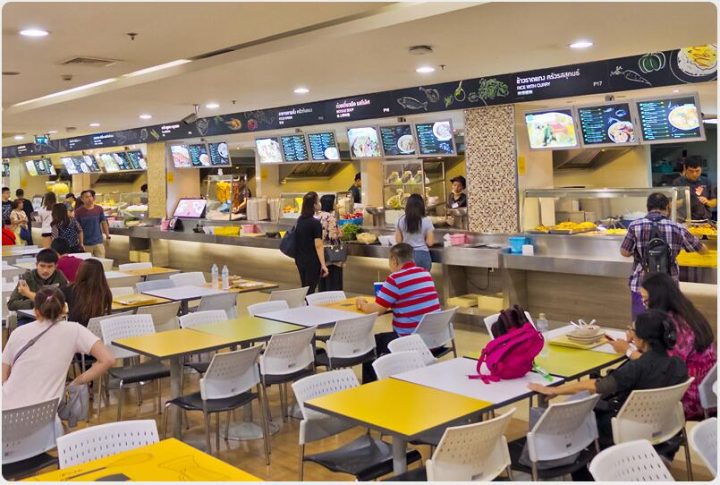 Breakfast can be eaten from 04:00 or 05:00, and many of the stalls below the BTS train stations, for example, open during these times. As early as 7 a.m. to 8 p.m., for example, Pratunam’s marketplaces have a lot of stalls where locals eat, but Khao San Road, for example, has little to do before 9 p.m. The surroundings of Khao San Road may not be the best to go early, but it is at its best for dinner.

The actual restaurants and food courts of the malls open from 9 a.m. to 10 p.m. Some of the steakhouses in Sukhumvit, for example, only open from 11 a.m. to noon.

The food courts in the malls are open from 8 pm to 9 pm. The restaurants are open a little special, so some close early, and there are not many restaurants open in the Pratunam marketplaces after 8pm, for example. Khao San Road, Soi Rambuttr and Sukhumvit can be eaten late, even at night, and dishes are available on Khao San Road until almost dawn. After that, the first locally-favored stalls where you can have breakfast will open at about 5 a.m. at the river-side end of Khao San Road and Soi Rambuttr and the nearby streets.

In Bangkok, it is best to prepare for a meal to be paid for in cash. In fine restaurants, you can pay by card, but often there is an additional charge of about 3 percent.

Paying with a card is easier today than it was a few years ago, but due to the costs involved, Bangkok is reluctant to accept cards at restaurants. You should always keep a lot of cash with you, and because of the withdrawal costs, you should always withdraw a large rather than a small amount.

If you want to save on costs, you should bring 50 and 100 euro banknotes, which can be exchanged anywhere without exchange costs, and get the best rate for large banknotes. When exchanging money, you must have a passport, a copy of your passport or an identity card issued by the police.